Downtown Mesa is getting a microbrewery and it will be open before the end of the summer. Yes, really.

Desert Eagle Brewing Company is said to open by July of  2012, which is a few years before trains will be heading past their location at 150 West Main Street in Mesa, AZ. Desert Eagle will join Four Peaks, Dave’s Electric Brew and The Phoenix Ale Brewery as brewers located close to the light rail line. Sleepy Dog on University (east of McClintock) is another close one, but it’s a bit of a hike even if it is a really cool place. The light rail line is becoming a real destination for some serious beer action.

Once the light rail line opens in Mesa in 2015, Desert Eagle will be conveniently located between two stations. The closest stations will be at Country Club and at Center Street, each will be just a short trip no matter how you slice it.

I’ve said it before and I’ll probably say it again in the future, but the new Mesa section of the light rail line has a TON of potential. Anyone that knows anything about transit oriented development knows that this part of town is perfectly situated for transit riders. And, quite possibly, for beer drinkers.

“The 4,000-square-foot establishment will have room for 49 patrons in a tasting room. A beer garden along Main Street will seat about 50 people.”

A beer garden along Main Street in Mesa. My, how times are changing. Studies and discussions with residents and business owners have determined that this area is a great fit for a brewery.

When they open, Desert Eagle will have two or three of it’s own brews along with some other craft beers.

How ironic that we hear of the opening of Mesa’s first microbrewery on the same weekend of the Great AZ Beer Festival in Tempe.

For beer lovers in the Valley, life is getting better all the time… 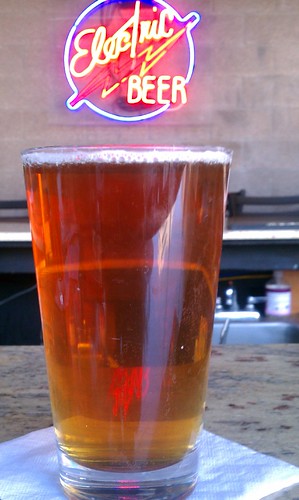