You are here: Home / Marina Heights

Marina Heights is a huge new development along the south side of Tempe Town Lake, just north of Sun Devil Stadium. We are talking about 2 million square feet of Class A office space along with 60,000 square feet of retail space with a $600 million price tag. ( or more ) Along with this huge amount of office and retail space, we are hearing about how State Farm wants Marina Heights to be a world class operation. There will be open areas and greenbelts within this massive 20 acre complex, as well.

Here’s a cool video showing what the project is going to look like. We’ll post more photos to the bottom of this page as time goes on, as well.

Marina Heights will certainly change the skyline and the dynamic of the entire area. With thousand of new jobs and thousands of new people descending upon the area, this stretch of Rio Salado will forever be changed. You can click this link to see a time lapse of the project.

**Update: Here’s some cool news about some of the retail / restaurant / commercial spaces that will be located at Marina Heights. On December 8th of 2015, the Business Journal reported about some new additions to the space. In addition to Matt’s Big Breakfast, Starbucks and Mountainside Fitness, there is a 6000 square foot restaurant space for lease. It is my understanding that these spaces will be open to State Farm employees and to the general public.

Just a few years ago, it would have been difficult to imagine one single project having such a big impact on the Lake and Mill Avenue Districts in Downtown Tempe. The start of construction at Marina Heights seems like it was caught up in a “perfect storm” of new additions to the area as hotels, more restaurants, more commercial development, new housing and new apartments have been coming out of the ground over the last couple of years. This is truly an exciting time to be in Tempe.

Here’s a photo from the very early stages of construction. This was taken from the 11th floor of one of the Hayden Ferry buildings before any of the buildings had actually come out of the ground. The photo below was taken from the North Shore Condominiums across the lake from Marina Heights. You can see the construction cranes, Sun Devil Stadium and the Hayden Ferry buildings. Here’s a photo of Marina Heights in February of 2015 showing some of the progress that is being made. The first phase of this project is scheduled to open in 2016. The photos below are from April of 2015 during the annual Pat’s Run and from June of 2015. During Pat’s Run, thousands of people who might not live, work or play in the area probably got their first look at how massive the Marina Heights project is going to be. ( you can click the photos to enlarge them ) 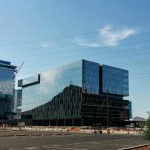 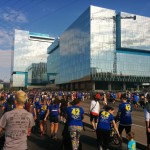 Here’s a photo of Marina Heights from November of 2015 as taken from Sun Devil Stadium. Here’s another shot I took from the balcony of a nearby condo at North Shore. GREAT views for the buildings from some of these condos! These photos were taken in February of 2016. People have started moving in to Marina Heights and some of the restaurants and other tenants have been announced. Check out these photos taken from the top of nearby A Mountain. I think the contrast is kind of cool. ( click to enlarge ) 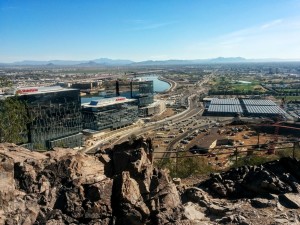 From top of A Mountain

It is going to be fun to continue to watch the progress at Marina Heights and to see how State Farm begins to become more of a part of this community. I’ve enjoyed speaking with several State Farm employees and look forward to helping more of them learn about this great community of Tempe that we call home. If you are a State Farm employee relocating to Marina Heights, we’d love to show you around or send you information that will be helpful with your move. You can contact the Nick Bastian Team at Realty Executives at 602-803-6425 or take a look around our site for some relocation information about the area.