This past Monday, METRO held another public meeting to discuss the Tempe Streetcar project. There was a strong turnout at the Tempe Transit Center from people for and against the project. Of course, there were people that wonder why we can’t use the Orbit system or have a bus system travel the route or just have a trolley like the one in Scottsdale. They want to know where the proposed “$175-$200 million” will come from. They want to know how the ongoing operations will be funded. What will the streetcars look like? How many people can ride on one? What is the proposed streetcar route? Where will the stops be located? When does construction start? Will business be hurt during construction? When will the project be completed? And that’s just a small sample of questions and things covered at this latest public meeting.

At the meeting, I tried to follow along and take notes. METRO did a pretty good job in answering questions and providing information. The naysayers were sometimes vocal, but the majority of the audience seemed to like the project.

Here are the basics of streetcar. They are designed to support an existing transit system. They run on tracks, typically mixed in with traffic. Most run on overhead wires and stop more frequently than light rail. They have the “ability to attract new riders, increase mobility, strengthen existing neighborhoods and create sustainable development.”

So, here are some things that were discussed at the latest public meeting. You should be able to click any of these photos to enlarge them for easier reading.

1. Timeline: As you can see from this photo, they are still in the planning and design phase of the Streetcar project. Construction should begin in the Spring of 2016 and run for a couple of years. The Streetcars should be operational in the Fall of 2018. 2. Streetcar map and route: Here’s the latest and greatest updated route for the Tempe Streetcar. It shows the location of the route and the stations. Some of the station locations had been previously approved, some are newly proposed stations. The council approved this route in June of 2014. The 3 mile streetcar line shows 15 stations/stops. There was talk at the meeting of the stations being designed to look similar to stops in Portland and Seattle. They will contain basic shelter, benches and trash containers. Yes, the sun is being considered. They are also looking at bicycle integration, as they expect demand to be high for bicycles. METRO says that 7-8% of light rail riders are bicyclists.  Around here,  transit riders will typically walk 1/4 – 1/2 mile to transit, while people on bikes will travel 2-4 miles. The apparent thought process is that if you make the trains more bicycle-friendly, ridership increases. City officials have been working to help bring a bike-share program to town, as they feel like it integrates well with Tempe’s existing and future transit plans. 3. Power systems and vehicle types: There is still a lot to consider before they choose car types and power systems. Two types of power systems are being looked at. The two types are 0n-wire and off-wire propulsion systems. On wire seems to be the most common type of power system. It is a “proven technology” that will require overhead wires. The off-wire system would not require overhead wires running down Mill Avenue, but it is an unproven technology that uses batteries to power the trains. There seems to be some concern about the power demands on these batteries during the extreme heat. Questions remain about cooling the trains and the high number of starts and stops of the trains with unproven battery technology. Currently, there are no streetcar systems in the US running on battery power. Europe has used off-wire systems with “mixed results.” Detroit and Dallas have chosen to use batteries, but they are new systems that are not yet in operation.

The vehicle types have not yet been chosen. There are three car options:

Short trains that are 65-70′ in length. These are currently used in places like Portland, Seattle, Washington DC and in Tucson. The Tucson cars are 66′ long, 11′ high and 8′ wide.

Medium trains are 75- 80′ in length and are currently used in places like Atlanta and Cincinnati.

Long trains are 90′-105′ in length and are used in places like Salt Lake, Toronto and here in AZ with our light rail trains.

The Tempe Streetcar will just run one train at a time. Occasionally, we run 2 and 3 trains at a time to meet high ridership demand for the light rail system. Speaking of high demand, questions came up about all of the events on Mill Avenue that close the streets. Since the chosen route loops around Mill Avenue, there is a concern that the system would not be able to run during events when demand would be at its highest. The plan is to have the trains run both ways along Ash Avenue during large events to help move people during any shut down of Mill Avenue between University and Rio Salado. 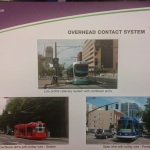 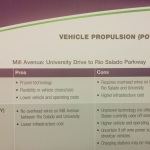 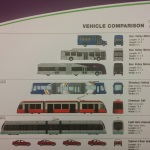 4. Environmental studies: There is a lot of work still be done to learn more about how the construction process and the finished design will impact the area and the surroundings. They need more information about how the noise and vibration of the trains will effect nearby neighborhoods. They need to study traffic patterns, environmental issues and be aware of historic preservation efforts. We have been talking about the Tempe Streetcar for years, but much work is still ahead. Costs, costs and more costs. While the price tag for a system running on 3 miles of track could hit $200 million, the city of Tempe isn’t writing a check for that amount. Alec More, a Valley Metro planner , says the project imposes no capital costs on the city. Construction and procurement money will come from federal grants and the Public Transportation Fund, a designated countywide reserve. As for the maintenance and upkeep of the system, the annual costs are said to be in the $3-4 million range. Currently, the City of Tempe has $3 million in their budget set aside for the 2018 maintenance costs. It isn’t exactly clear ( to me ) how the city will pay the $3-4 million on an ongoing basis. The fare boxes help to offset a LITTLE bit of the cost, but other ways will need to be determined. One person at the meeting mentioned that he was against “wrapping” the streetcars, because he didn’t want them to look like rolling billboards. My money says that you’ll see advertising on the streetcars and you’ll see a lot of it.

Of course, the other side of the money coin is the economic development piece that we hear so much about. Business owners are more likely to spend money to be near a fixed guide way. Building something big near a bus or Orbit route isn’t typically seem as financially astute. Wulfe Grote from METRO likes to talk about lack of development along move-able routes by saying that ““People cannot count on that investment to be there,” he said. “It can move overnight.” Obviously, light rail and streetcar routes are long term plays.

Just for fun, I made this map below to show the APPROXIMATE locations and route of the new Tempe Streetcar. Take a look.

As we hear more about Tempe Streetcar system updates, we’ll try to pass it along. Thanks for rockin’ the Rail Life with us!