Yesterday, there was a lot of talk about the big announcement from Parkway Properties that they have “commenced construction of Hayden Ferry lll.” This is  a 261,000 square foot, Class A development at Mill and Rio Salado.

“Hayden Ferry III will be the final phase in Parkway’s 780,000 square foot master planned office community.  The 10-story property will be located along the south shore of Tempe Town Lake, offering waterfront views and accessibility to the Mill Avenue entertainment district and light rail system.” – Parkway Properties via Yahoo! Finance

Much of the news coverage, press release information and chatter from city officials sounded exactly like the talk we heard in early 2012 when a bunch of people gathered for the original groundbreaking ceremony. I’ve kind of been wondering about this tower as it was originally planned for construction to start at the end of 2012 but the hole they started a while back remained untouched for months. Here’s a pic I took in August of this past year when I was wondering what the delay was all about.

It seemed odd to see this big hole in the ground without anything happening while their neighbors to the east are building Marina Heights at warp speed.

This is a rendering of what will be built at Hayden Ferry. This will be the last commercial building that is part of the Hayden Ferry Lakeside project. All 5 of the commercial and residential towers will have the same look and feel. 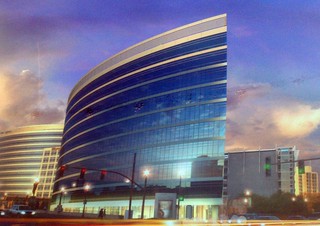